The A.J. Brown Memorial Trail Around Burley-in-Wharfedale District.
Introduction
​
Alfred John Brown (1894-1969), prodigious walker, prolific writer and passionate Yorkshireman, was best known for his books about walking in 'God's Own Country' of Yorkshire. During the 1930s and 1940s he was one of the most popular and widely read authors about the Dales and indeed the whole of Yorkshire. He influenced whole generations of Dales lovers and walkers to explore the county of foot and became something of a Yorkshire icon in his day.

While he was born and bred in Bradford, where he worked as a sales representative in the wool trade, he was a resident in Burley-in-Wharfedale from 1927 to 1945. It was here that he was inspired by his time living in his favourite dale of Wharfedale. During this time he wrote his most notable series of 'tramping' books about Yorkshire, which even appealed to those 'armchair' readers who were not able to actually explore the County on foot for themselves.

The A.J. Brown Memorial Trail follows a 'figure of eight' route of about 6 miles (10 km) around the local Burley-in-Wharfedale district, which includes parts of the township of Burley and the edge of Burley Moor, as well as a section down to the River Wharfe. Along the way places of interest are identified, briefly described and illustrated which have particular associations with A.J. Brown and his family during their residence in Burley-in-Wharfedale. 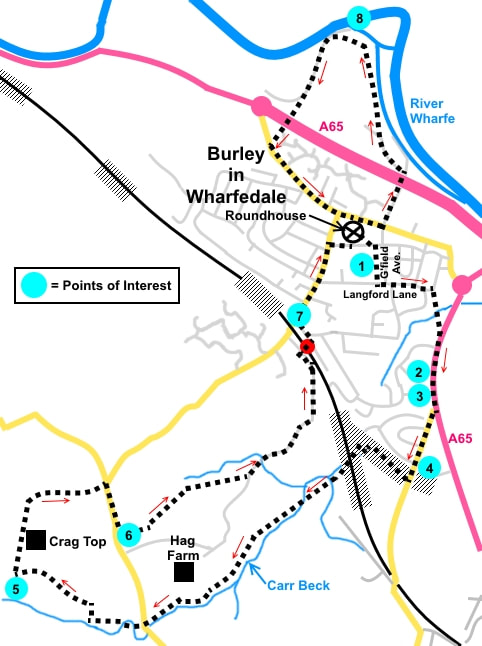 The Burley-in-Wharfedale Section
​
Start the walk at the Roundhouse on Main Street and follow the footpath diagonally across Grange Park into Grange Road. Turn left and continue for 80 m. then turn right into Grangefield Avenue, and stop outside house number 33.
​
​Continue to the end of Grangefield Avenue, then turn left along Langford Lane and continue for 200 m. At the left bend continue straight ahead on Langford Lane past St. Philip's Drive. Then turn right through a gate into Burley House Field and walk diagonally to a footbridge crossing Carr Beck.

Continue straight ahead to the stile/gate in the wall and emerge on to the Bradford Road (A65). Then turn right along the pavement and continue for 200 m past the petrol station and after 50 m stop outside the house named 'Wharfegate'.
​
​Continue on the pavement for 50 m and stop outside the R. C. Church of St. John Fisher & St. Thomas More on the right.
​
​Continue a short way along the Bradford Road to the junction with Menston Old Lane on the right then turn up the lane for 350 m to the junction of Endor Crescent on the left, and stop outside the house at the junction on the left known as 'Littleburn House'.
​
​Continue up Menston Old Lane for 50 m passing the site of the old railway bridge, which once carried the M&NER Otley & Ilkley Branch railway line, then turn immediately right, up onto the old railway embankment.

Follow the footpath for 350 m then turn left down the steep path, through a kissing gate and into the field. Turn right almost immediately to cross the stile, following the path through trees for 75 m to ascend the railway embankment.

Note: The path crosses the main Ilkley/Leeds/Bradford railway line and caution is needed to cross the busy railway, so please read and obey the instructions on the safety sign.

Descend from the railway embankment to cross over a stile, then bear left to cross Carr Beck again over a footbridge. Turn right to follow the beck until a gap in the fence, and then walk diagonally across the field until another footbridge is reached. Now bear left to follow the right hand side of the stream for 200 m, then through a metal gate and over a style before heading up the left hand side of the field. Continue to follow the course of the stream for 500m through three stone style gaps in successive field walls.

Cross the Ebor Way/Dales Way Link footpath between Bleach Mill (to the left) and Hag Farm (to the right). Refreshments are available on most days throughout the year from Bleach Mill. Go straight ahead on the footpath up through a wood following the line of Carr Beck in a ravine below on the left. After 200 m pass through a stone gap stile to follow a wall and fence on the left for 150 m  to another gap stile, and then over a wooden bridge to emerge at a row of three storey cottages. Continue up the short steep tarmac road and arrive at Moor Road where a convenient seat is located.

Note: the route then crosses the sometimes busy Moor Road and caution is needed with blind corners to both left and right, before following the public footpath sign directly opposite up Green Lane.
​The Burley Moor Section
​
Follow Green Lane for 750 m to reach York View Barn on the left, with The Shooting Lodge and Old Pumping Station on the right.
At this point on a clear day, there is a fine panoramic view over Wharfedale towards Otley Chevin (east), Almscliff Crag (north east), Askwith Moor (north) and middle Wharfedale towards Ilkley Moor (north west), while Burley-in-Wharfedale can be seen in the valley below. At the top of the farm roadway pass through a metal gate with a 'Welcome to Burley Moor' sign to the moor.
​Once on Burley Moor turn right immediately along an undulating rough farm track and down past an old stone quarry on the left for 400 m to Crag Top Farm on the right. Then branch left on down a green path and descend via a rocky track to a metal gate leading to the Moor Road again. Turn right along the pavement and follow the road for 350 m to arrive at the historic Hermit Inn where refreshments can be obtained.
.
​On leaving the Hermit Inn proceed via the footpath signposted 'To Burley-in-Wharfedale' at the end of the car park. Follow the tarmac drive down to a circular residential parking area and a pathway into a field through a gate. Proceed down the field with fence posts on the right, through an iron gate after 250 m and along a path at the side of a wood via two wooden gates. Cross a wooden bridge and over a stile into a field. Continue straight ahead for 200 m to join Hag Farm Road.

Turn left along Hag Farm Road passing The Gables house on the left. Then after passing Mayfield House on the right, ignore the footpath into a field ahead and continue along Hag Farm Road, which runs parallel with the railway line on the right. On approaching the railway station, take the path entrance on to the west-bound Ilkley platform and cross the footbridge to the east-bound Leeds platform, before making an exit from the station through the car park onto Station Road.
​Turn right and continue down Station Road to the junction with Grange Road, then turn right until reaching the Burley Library and cross Grange Park to return to the Roundhouse.
​The River Wharfe Section
​
Start at the Roundhouse again, turn right and go down to Main Street, opposite the Red Lion pub. Turn right and pass the Queens Hall. Note the prominent memorials to William Forster (1818 - 1886) and William Fison (1820-1900), and between them the wall plaque to the poet Sir William Watson (1858-1935).

Continue past the pedestrian crossing then take the next left turn along Iron Row, an attractive row of cottages built for mill workers about 1800. The route continues through the old stone gateposts for what was the mill entrance and passes the recreation ground to go through the subway under the A65.

The path rises gently to Great Pasture Lane. Turn left in front of the second set of old stone gateposts where there are good views on the left towards Burley Moor. As great Pasture Lane turns left into Great Pasture (a private road), go straight on at the bend to walk along the fenced permissive footpath. Along the path note the scale of the Greenholme Mill building on the right.
Go through a kissing gate and follow the footpath as it swings left down through the trees. Follow the broad path alongside the course of the redundant goit which provided water power to the mill. The goit and the footpath are owned and maintained by the West Riding Anglers Association.

The path follows the goit and passes a large green gate on the right. This is the entrance, over the bridge, to a hydro-electric generating plant (the stone building that can be seen through the trees). This is powered by the recently renovated goit which you are now walking alongside.  A marked increase in the speed of the water is noted from here on. On the left there can be seen a raised, slightly angled stone slab in the field in front of Greenholme Cottages. It marks the site of Greenholme House, the Palladian Mansion built in 1820 by William Fison's father-in-law, Jonas Whittaker. It was demolished in 1923 and the stone was used to build the houses on Great Pasture. Continue along the broad track until a junction on the right, and turn right here over the bridge to view the impressive stone weir.

At this point the stepping stones, which were restored in 2013, can be crossed to the north bank of the River Wharfe to give access to a footpath and a bridleway to Askwith, as well as a number of walking routes through the Nidderdale Area of Outstanding Natural Beauty.

Note​: Caution is needed if crossing the stepping stones since there are deep pools here and the river levels can rise quickly to prevent use of the stepping stones. Hence there is a long-running campaign by the Burley Bridge Association to have a footbridge constructed to ensure safe year round crossing.
Return to the broad track and turn right. The track now becomes a tarmac lane known as Leatherbank, and there are pleasant views eastwards towards Otley Chevin. Follow Leatherbank until as it turns around the Ghyll Royd School playing field, then go straight ahead to follow a path through another subway beneath the A65. Follow the path until it merges into Burley Main Street by a black and white cottage. Turn left and follow Main Street back to the Roundhouse.
Leaving Burley-in-Wharfedale
​
After his WW2 service, Alfred and his wife left Burley-in-Wharfedale in 1945 to buy the Whitfield House Hotel in Darnholme, near Goathland, on the North Yorkshire Moors, and operated a family-run country inn for nearly six years. During this time Alfred became a 'Literary Innkeeper' and published two books about the hotel experiences, a semi-autobiographical novel, a Yorkshire anthology, a book of poetry and a another topographical work about North Yorkshire.
​
On the strength of this literary output Alfred sold the hotel and embarked upon a risky full-time writing career, but after two relatively unproductive years in London and York, he found that he could not live by his pen alone.  Economic necessity forced him to return to the Bradford Wool trade in 1954, and he travelled extensively as a sales director in Europe and the Middle East. Then in 1960 he established his own textile agency to represent UK specialist worsted manufactures' interests in Germany and Austria.
In 1967 Alfred and his wife moved to Sleights in North Yorkshire, where in semi-retirement, Alfred continued his agency work with his son as junior partner. However in late 1968 after he became ill on a business trip to Germany, he returned home and was diagnosed with terminal cancer. He died at home on 1 March 1969 and was buried in the St. John the Evangelist churchyard , Sleights, with a headstone inscription from his famous poem, 'Dales in Paradise', which reflects his eternal 'tramping' wish: "There must be Dales in Paradise, which you and I will find".
Walkers are Welcome